Some time back, I might have crashed a private little test drive party that one of the major automotive magazines was holding on the endless blacktop swaths of El Toro Marine base, in preparation for a large spread they were doing on electric vehicles. And as I looked at the half dozen or so vehicles gathered there, I could have, maybe, been feeling cheeky enough (I know- tough to believe, given the red hair) to challenge the accompanying personnel about who was going to put a car in my driveway first. I was teasing, and they knew it – but hey, I’m as eager as anyone else to see plug-in vehicles make the leap from auto show turntable to “what can I do to get you into this car today?”

Alas, the only thing I actually brought home that day was a sunburn. In the year and a half since, three of the vehicles present have since been cancelled– but one of the automakers from that event recently became the first to come through. It was only for a week, but I say it counts. Ironically, it wasn’t one of the companies who will be putting cars in showrooms this year, but Mitsubishi- a company aiming at the end of 2011 or so for the US market- is first out there with the loaner cars.

I think it’s a great idea; properly done, pilot programs and vehicle loans are an incredibly  useful and efficient marketing and engineering tool for plug-in vehicle programs. They get people used to the technology, and in many cases, over range anxiety. And there’s no better way to vet the engineering and construction of a vehicle than to put it in the hands of regular people- anyone involved with the Impact/EV1 PrEView Drive will forever remember the time an entire car was disabled by a can of root beer. Just as important, they get people excited and talking- generating instant ambassadors for the technology and, if it’s any good, for your product. So we were nothing but excited to bring this little guy home: 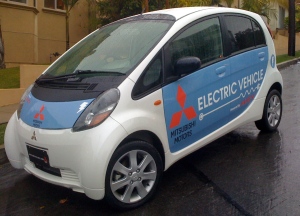 And of course, he fit in just fine with our other vehicle… 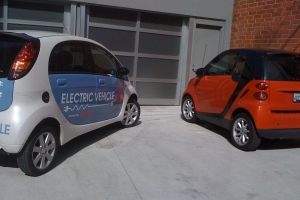 I’ve driven the iMiEV before, so this wasn’t so much about evaluating the car as just living with and enjoying it- something my 11-year old son was only too happy to do. He insisted that we name the car, so after an impromptu facebook contest and approval by the boy we christened it, appropriately, “Mr. Bean”. And then we spent the week taking him on adventures (apologies for the amateur iPhone photography):

We wanted him to make friends, so we took him on a playdate…this is one of four iMiEVs that Best Buy is using in their Geek fleet; it happens to live at my local store. They got along famously, so much so that we decided to move along before they needed to get a room…

The next day, we headed to the local Tesla store (where Bob works) and gave the staff rides in Mr. Bean. They clearly approved- which led to a few ideas…

…we considered returning him as an “iMiEV Sport”- I think it could’ve worked, don’t you?

In the end we behaved (as far as we’re willing to admit), but did let him hang out with the neighborhood bad boy for a while.

Which may have been a mistake, as it appears he went sneaking out later that night…I’m such a corrupting influence!

Finally, we figured we had to round out Mr. Bean’s social experiences with an intellectual one…and who better to provide that than Bill Nye the Science Guy? We spun him around a little bit after an event in Long Beach, and he’s now a fan too!

Mr. Bean treated us at least as well as we treated him- handling remarkably well in all sorts of rainy driving, and easily giving us 60-70 real word range miles, even on the freeway. If I was careful, I could eke out a few more, but we mostly just ran around, managing to log about 500 total miles that week! We experimented with all three driving modes (like many EVs, there’s an “Eco” and an engine braking mode in addition to the standard drive mode) and enjoyed the strange looks we got from the right hand drive. At night, we tucked him into our garage (a picture I’ll spare you from) and recharged him with a standard 120v outlet, though Mitsubishi is also planning for both 240v charging as well as DC fast charge.

Our week went by faster than we’d have liked, but we clearly had a blast getting an “EV fix” until the next time. Not that Mitsubishi wasn’t kind enough to leave us with a little consolation prize…

Looks like that sunburn was worth it after all…

PS- Mr. Bean went next to play with Paul Scott and Zan Dubin Scott, who wrote about their experience here.